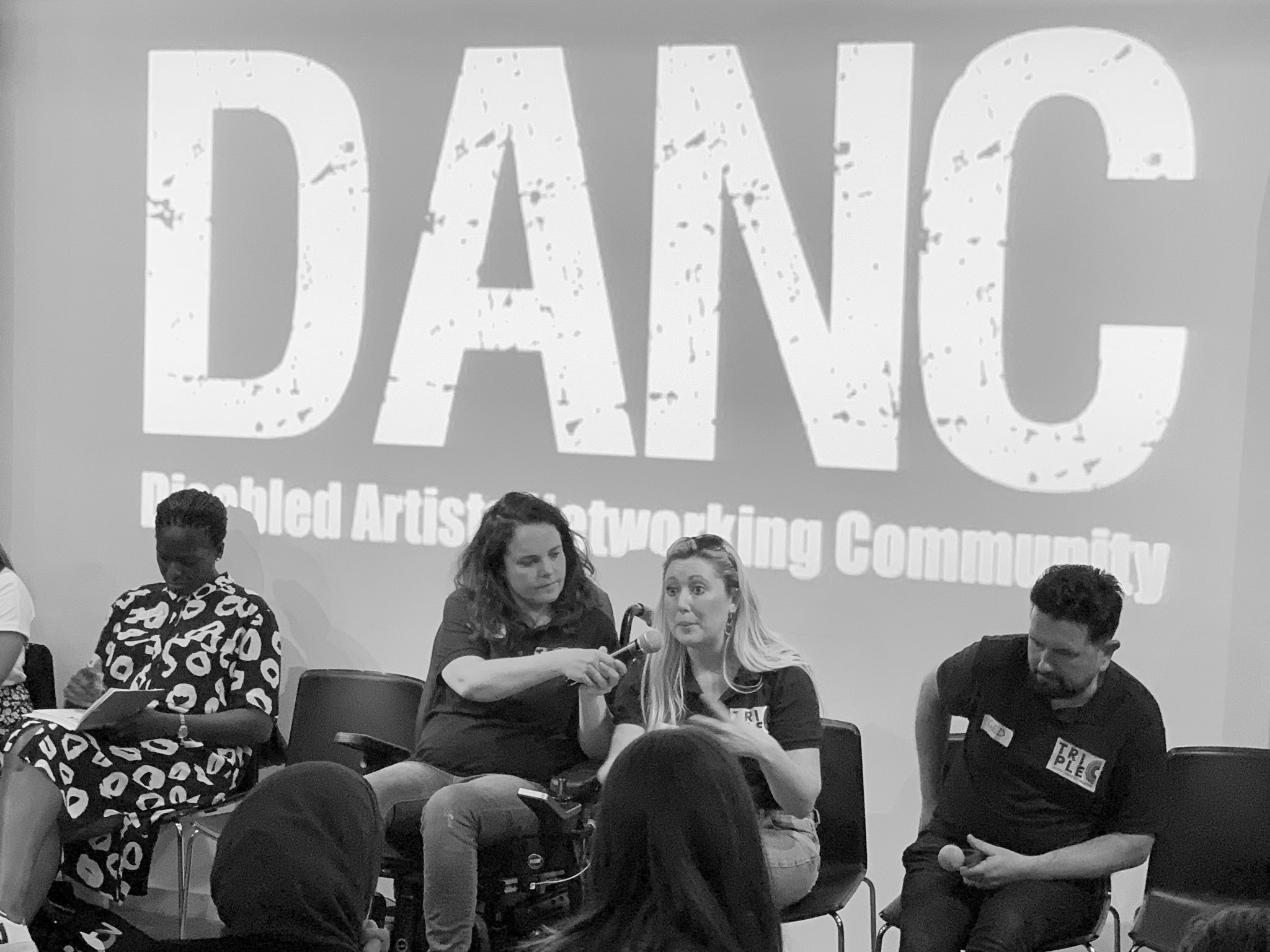 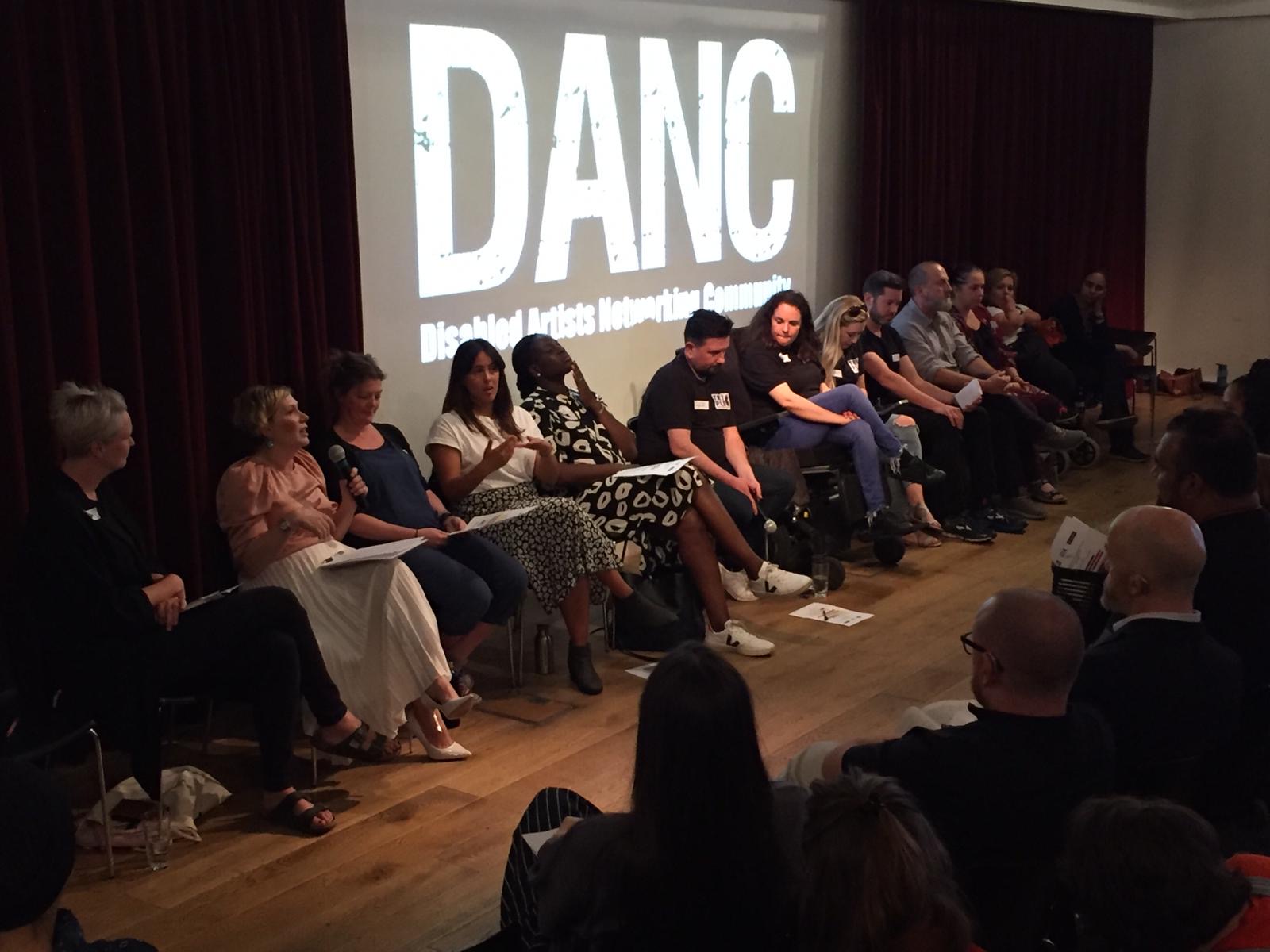 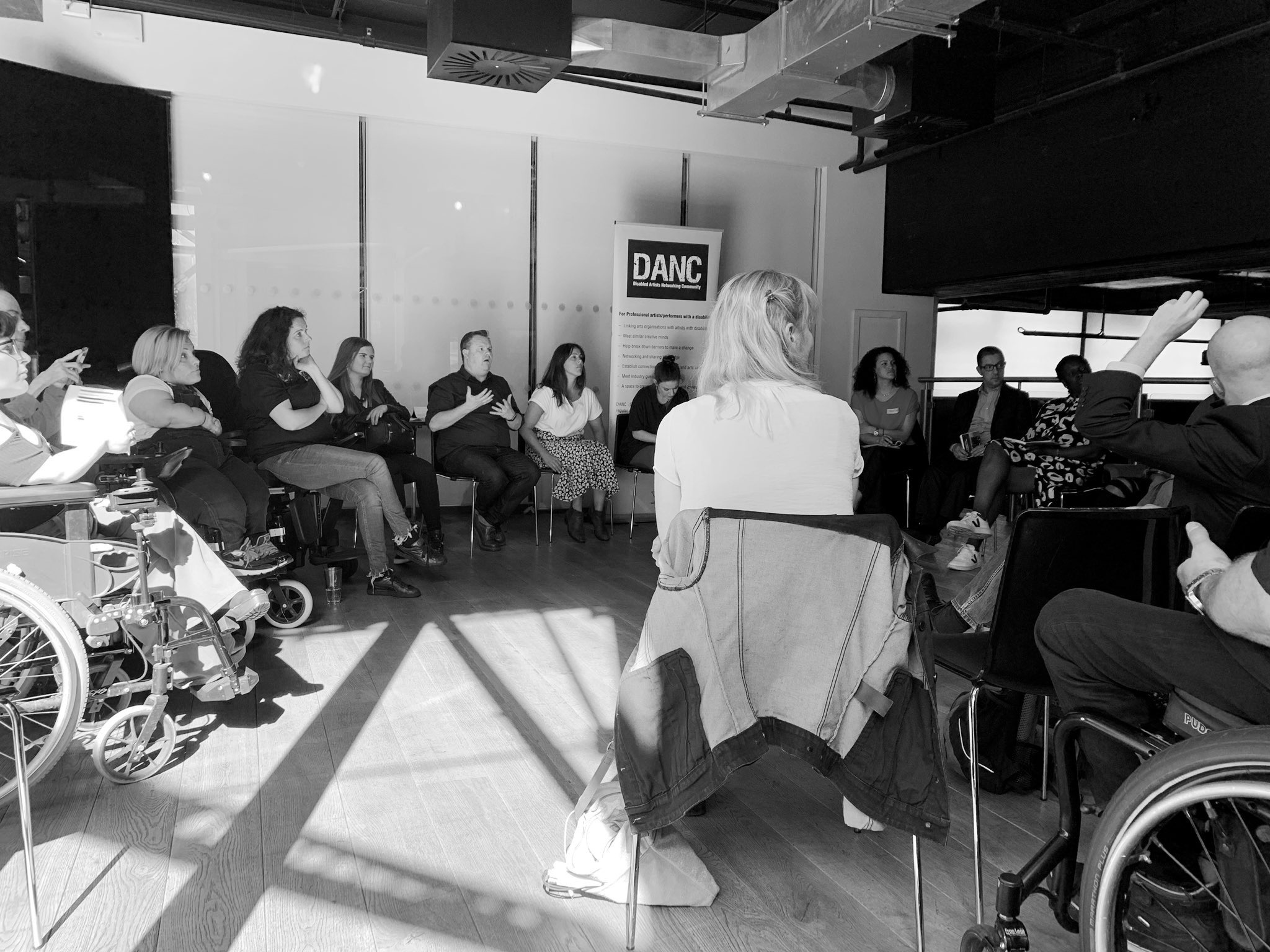 In the summer of 2020, we undertook an evaluation of the impact DANC has made so far. A great number of disabled artists identified paid professional work they secured as a result of their involvement:

“It’s transformed my career. After attending a DANC event where the two industry professionals there were from the BBC and LA Productions, I went on to join the BBC Writersroom Writer Access Group, which led to writing for Casualty, Eastenders and CBBC, and also I’m now writing a script for Moving On with LA productions. I’ve been to other events too which I’ve made contacts at. I see DANC as providing a kind of bridge – I’d already built up a strong range of work in Deaf programme making but through DANC I was suddenly able to access the mainstream. I’m now making work in both the deaf and mainstream sections of the industry.”

“When I was starting out in theatre as a producer in the Royal Exchange Young Company, I went along to a DANC Meet up. There I met other disabled artists who I would go on to work with on my first independent project and we entered the Co:LAB festival. That was an extremely invaluable experience and I learned loads during that time, and I have since gone on to work as a producer, primarily with deaf and disabled artists with Unlimited and currently Disability Arts in Surrey.”

“I am a writer and through your London events have met producers who have since optioned my scripts.”

“I have had opportunities to develop as a writer through DANC’s screenwriting mentorship programme. And I was paid for a play that was written and performed as part of Oldham Coliseum’s mini podcast series.”

“Had the confidence to call myself a disabled performer for the first time. Had the opportunity to audition for a number of casting directors that I had previously only dreamed of meeting. Finally feel like I have found a place in the industry. [I’ve now been] booked for my first professional theatre job with Ramps on the Moon.”

“Opportunity to meet script editors and follow-up by sending scripts. I learned valuable info re operating in the industry and found out about opportunities such as Moving On, which I successfully pitched for.”

“Connections that have led to opportunities such as shadowing TV departments, script reading, being mentored by the BBC as part of their Scripted Disability Training Programme and gaining a paid placement on The A Word. Also finding a community of friends.”

“Off the back of one of DANC’s events, I had a one-to-one chat with a talent development officer at HOME. The officer gave me help and advice about a project I wanted to do. Because of this advice, I felt I was able to apply to HOME’s Open Manchester exhibition. This experience gave me the confidence to apply to Disability Arts Online for an online art exhibit. But if it wasn’t for DANC’s encouragement I wouldn’t have taken the first steps. “

“I have had several opportunities through DANC.  I received my first writing commission due to an opportunity that came via DANC. I have done two Podcasts and a Theatre role.   None of these would have happened without DANC.”

“A BBC acting role, increased contacts and [I now] feel part of a community.”

“I have got two auditions and out of them jobs that have helped increase my profile, as well as boarder places to showcase my material”

“I’ve made wonderful professional connections through DANC / TripleC that have led to incredible general meetings and work opportunities, met lovely friends, felt connected to the wider community and filled with positive influence by knowing that I have DANC’s fantastic webinars plus mailing list to look forward to every week. I’m sure there are COUNTLESS other ways in which they have bettered my life…”

“DANC started shortly after I graduated in Comedy Writing and Performance and I can honestly say it has changed my life. I acted in a script in hand performance at The Lowry with Manchester ADP, organised through DANC and I loved it. I have been to the most brilliant workshops and met fellow creatives, networking and forging friendships. Other creative outcomes have happened as a result. Most recently I wrote a duologue which was produced as a podcast by Oldham Coliseum. It was an amazing creative opportunity and I feel that my whole learning and development has been enhanced by the opportunities DANC has given me.  During lockdown I have had an amazing time learning from the outstanding webinars from so many leading creatives. I also loved being part of a script reading. All these opportunities have allowed me to flourish as an artist. My confidence has grown so much and I feel that whereas at the start of my career I was not just metaphorically but sometimes literally on the edge of performing, I am now part of the industry.”

We also spoke to arts venues and industry professionals who told us how their involvement in DANC has led to positive outcomes:

“I have found out about writers I didn’t know about and have been able to work with them and help them with their career advancement. Also means I am able to inform others in the TV industry that are in the position to train and recruit disabled talent too.”

“As Script Producer on The A Word 3, I also got to work with some of the brilliant trainees that DANC put forward. They made such a difference to the production and I hope they found the experience worthwhile. Most recently I worked with DANC to hold a script editing workshop, for writers and script editors to learn more about working in TV production. It wasn’t something I initially felt I’d have the confidence to do, but with DANC’s encouragement I held the session and got some lovely feedback. It was a big step for me personally, but it also feels so important that as writers/script editors, we’re able to connect – especially if we’re outside London. I’ve made some new contacts and got some sense of the network as a whole, and I’d love this to continue.”

“DANC have been instrumental for us in advising us on ensuring our venues (theatre and studios) have been accessible throughout and that we have the necessary amenities to ensure nobody is excluded. They have helped us with developing our classes and workshops to ensure a diversity and accessibility. They have also introduced us to some incredible actors and creatives!”

“I’m delighted that DANC is Manchester-based… I’m so proud to be affiliated with them in a small way and, as a venue, without them we would have fallen into pit-falls that meant we couldn’t welcome everyone into our venue – simply not good enough. They’re not just incredible but imperative in the increasing awareness and visibility of disabled artists.”

“DANC provides excellent information and understanding which is key to making positive change. [Also] direct positive engagements with artists/makers who we might not otherwise engage with. Hosting meetings enables us to test how welcoming we are to artists/makers and visitors more generally.”

“DANC provides excellent information and understanding which is key to making positive change. [Also] direct positive engagements with artists/makers who we might not otherwise engage with. Hosting meetings enables us to test how welcoming we are to artists/makers and visitors more generally.”

“I’m delighted that DANC is Manchester-based… I’m so proud to be affiliated with them in a small way and, as a venue, without them we would have fallen into pit-falls that meant we couldn’t welcome everyone into our venue – simply not good enough. They’re not just incredible but imperative in the increasing awareness and visibility of disabled artists.”

“DANC have been instrumental for us in advising us on ensuring our venues (theatre and studios) have been accessible throughout and that we have the necessary amenities to ensure nobody is excluded. They have helped us with developing our classes and workshops to ensure a diversity and accessibility. They have also introduced us to some incredible actors and creatives!”

BAFTA
We use cookies on our website to give you the most relevant experience by remembering your preferences and repeat visits. By clicking “Accept”, you consent to the use of ALL the cookies.
Cookie settingsACCEPT
Manage consent

This website uses cookies to improve your experience while you navigate through the website. Out of these, the cookies that are categorized as necessary are stored on your browser as they are essential for the working of basic functionalities of the website. We also use third-party cookies that help us analyze and understand how you use this website. These cookies will be stored in your browser only with your consent. You also have the option to opt-out of these cookies. But opting out of some of these cookies may affect your browsing experience.
Necessary Always Enabled
Necessary cookies are absolutely essential for the website to function properly. These cookies ensure basic functionalities and security features of the website, anonymously.
Functional
Functional cookies help to perform certain functionalities like sharing the content of the website on social media platforms, collect feedbacks, and other third-party features.
Performance
Performance cookies are used to understand and analyze the key performance indexes of the website which helps in delivering a better user experience for the visitors.
Analytics
Analytical cookies are used to understand how visitors interact with the website. These cookies help provide information on metrics the number of visitors, bounce rate, traffic source, etc.
Advertisement
Advertisement cookies are used to provide visitors with relevant ads and marketing campaigns. These cookies track visitors across websites and collect information to provide customized ads.
Others
Other uncategorized cookies are those that are being analyzed and have not been classified into a category as yet.
SAVE & ACCEPT
Font Resize
Contrast
Accessibility by WAH